E is for Entrance 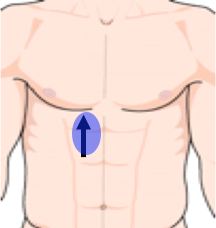 So the fifth and last E we are going to talk about is the E for entrance and that is really where the inferior vena cava enters the heart and it is very helpful for the assessment of fluid status or preload. It is best going to be seen if you do a sagittal view of the IVC so we rotate the probe so the indicator is towards the head put it in the subxyphoid or subcostal region and watch the IVC. So a normal IVC, you can measure it, but I really suggest you get used to doing it qualitatively; should be under 2 cm at its maximal diameter and it should collapse some with spontaneous inspiration or if you do what is called the sniff where you have the person sniff in through their nose they create negative intrathoracic pressure and blood runs into the chest and collapses the IVC and that is consistent with a normal preload or hydration status.

So here is an example of a dilated or plethoric IVC in a patient with fluid overload. You can measure this and look at the percent collapse which would be minimal - but getting a gestalt or just qualitative look at this you can tell that it is dilated and non collapsable; you can also see the dilated hepatic vein. So this is a patient that has the presence of fluid overload, dilated, non collapsable IVC.

Now the opposite of this is someone who is very dehydrated, has a very flat IVC, sometimes so flat it’s difficult to even to see it. Here, the arrow shows the portion of the IVC just as it's about to enter the right atrium, but the rest of it is pretty flat, as the patient breathes in it completely collapses. So this is a patient with a very low preload that could definitely benefit from some intravenous fluids. This is a flat, collapsed IVC.

So this is a patient with a more normal hydration status. If you're looking at the IVC and can get the patient to cooperate and to do what we call a sniff where they inhale quickly through their nose and create negative intrathoracic pressure, you should see some collapse and that tells you that it's a fairly normal hydration status, or preload; normal IVC.

So here is another example of 2 of the Es in this case entrance, the IVC you can see is dilated and non-collapsable, you can also see what’s called 'smoke' in there, which is sort of the echogenicity of the blood running into the heart which happens in a low flow state. The other thing you can see as shown in the diagram with the arrow is a fairly large pericardial effusion at the inferior pericardium just over the liver. The combination of a dilated IVC with an effusion is indicative of tamponade physiology. The IVC is the equivalent of the physical exam finding of jugular venous distention. Again, when the fluid is around the heart it prevents filling of the heart, it'll back up into the venous system, whether that is the IVC or the jugular vein.