So in this lecture we're going to talk about the use of ultrasound to help guide procedures. We'll focus a lot on vascular access because it's a commonly performed procedure and it really demonstrates the principles of ultrasound guidance using the ultrasound to track the needle tip and get into a fluid filled space whether it’s a vessel or someplace else. 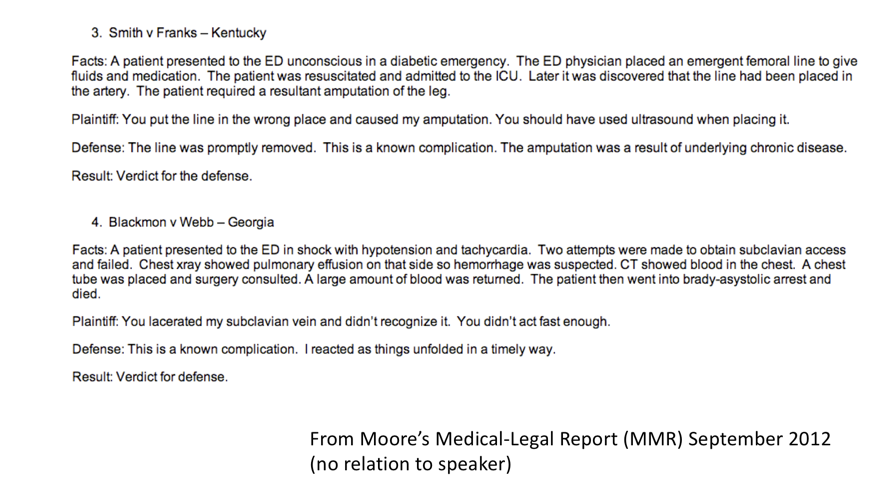 To give you a sense of some of the things that can happen if you don't use ultrasound, there are a couple recent legal cases that were actually in Moore's medical legal report, this is no relation to me, but it talks about two cases in the same newsletter. One is a patient that came in with a diabetic emergency - the ED physician put in a femoral line, it was later recognized in the ICU to be in the artery and resulted in amputation. The verdict was actually for the defense, they said this was a known complication and the amputation was a result of underlying chronic disease, but the plaintiff had claimed that they should have used ultrasound when placing it. Another case talks about shock and attempts at obtaining subclavian access in a patient that ended up lacerating the subclavian vein and caused the death of the patient. The plaintiff stated they didn't recognize this and didn't act fast enough. Again, the defense said this was a known complication and it was a verdict for the defense. Just because these cases came out for the defense does mean this is the best thing for the patient. I would argue that ultrasound can really help you do things better, faster, more efficiently, and safer particularly with vascular access.

The institute of medicine reported in 1999 that close to 100,000 deaths in the US are related to preventable medical errors, and they highlighted that there are more than 5 million central venous catheters placed per year in the US with mechanical complications occurring as frequently as 1 out of every 4 patients getting these procedures.

This same report actually highlighted that the use of US guidance could be one of the most effective ways to decrease medical errors and here is a report from more than 20 years ago showing a meta-analysis of the literature that real time ultrasound guidance improved success rate and decreases complications associated with IJ and subclavian catheter placement.

Another guideline in 2012 reinforced this, saying that there is level one scientific evidence that properly trained clinicians using real time US guidance will reduce complications and improve success of the procedure.

So why are we not using ultrasound? This is an evidence report from the UK but it’s similar in the US, and it may be related to availability of technology, but probably more is about training. People who didn't train using ultrasound may not use it in their practice even 20 years out. Hopefully the current generation of trainees that are coming out that are putting in central lines are getting training in ultrasound guidance.

One thing to keep in mind is that just because you have an ultrasound doesn't mean that it's a magic wand. This is a user-dependent technology and you really need to pay attention to where the tip of your needle is and to track that, and that’s what we'll talk about in this lecture - how to find your needle tip and know where it is, primarily in vascular access, but then you can use that in other ultrasound guided procedures.