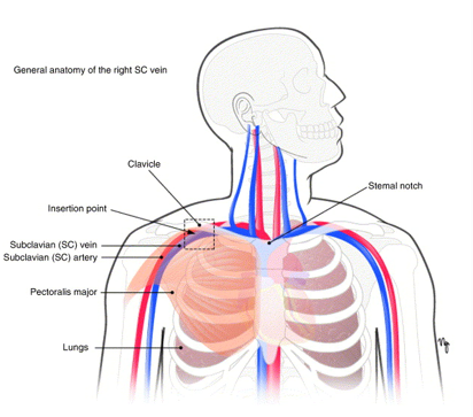 So subclavian central venous access is often performed blindly and it can be challenging to visualize the subclavian vein beneath the bony clavicle, but it can be approached either from below infraclavicular or above supraclavicular and ultrasound can be helpful for both of these approaches. Keep in mind that the subclavian vein becomes the axillary vein after it crosses the first rib and sometimes this is what you are visualizing and accessing. In this clip we can actually see that vein in long axis and we're also seeing the pleura which is pretty close, about a centimeter away, and that's an element you should be aware of as you are putting a needle in this area.

Described in Lancet in 1965

Once you've placed a central venous catheter there is decent evidence to suggest that you can actually use the ultrasound to confirm placement, to start medications, and to make sure that you don't have a pneumothorax. We'll talk about these uses of ultrasound in other lectures, but in these two clips the one in the upper left you can see an injection of saline with bubbles and that's filling the right ventricular cavity and you can see all the bubbles mulling around in there and that shows that you're in the right place, that the medications that you are giving are going into the right side of the heart. The clip on the lower right shows lung sliding that's the visceral and parietal pleura sliding against each other and this illustrates the absence of a pneumothorax, which would be air in there that would prevent us from seeing sliding. That is a known complication of central vascular access and ultrasound can help make sure that didn't occur during the procedure.